Posted on October 21, 2013 by allthewrightwords 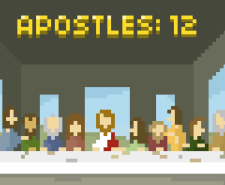 Play starts when baby Jesus crawls out of the nativity scene before he then does miracles and recruits his disciples at lightning speed. Gamers, playing as Jesus, have just 10 seconds in which to complete this surprisingly addictive game, including things like running on water and healing lepers. The ultimate aim is to recruit all 12 of his apostles. The 8Bit graphics, Mario-esque sound effects and music that stays in your head are a nice touch too.

The game ends with Jesus on the cross in victory (if he achieves all he set out to do) or him failing to make it to the cross (if you’ve had a game over). That means the makers of the game seem to think that him being on the cross achieved some sort of victory. Why do you think he died on the cross? And would you call him a winner or a loser?

Either way, a fun game worth a quick look. Find it here: http://churchm.ag/the-10-second-gospel-run-jesus-run-8bit-video-game/